The PNG National Qualifications Framework (PNGNQF) is a system of formal qualifications for post-secondary (tertiary) education in Papua New Guinea. A qualification is recognised by an award after the successful completion of formal studies. Typical names for formal qualifications are awarded as: certificate, diploma, bachelor, master and doctorate. The PNGNQF defines 10 levels of qualifications in terms of learning outcomes and the volume of learning. The framework awards a PNGNQF Level (1-10) which describes the standard of learning and the PNGNQF Award-Type which describes the purpose, volume and progression opportunities associated with a particular award. It is designed to ensure comparability in the standards, quality of tertiary education qualifications and award, nationally and internationally recognized.

The Framework describes in general terms what a graduate with a particular qualification is expected to know, to do and to communicate to obtain the award. It sets out the contexts and conditions in which graduates can be expected to perform. Tertiary education also referred to as third stage, third level, and post-secondary education, is broadly defined as education that is undertaken after the completion of secondary school education. Institutions offering tertiary education include universities, colleges, technical training institutes, community colleges, nursing schools, research laboratories, centres of excellence, and distance learning centres.Higher education includes undergraduate and postgraduate education, vocational education and training (VET) beyond the level of post-secondary education. It also recognises accredited programmes leading to the award of a national qualification.

Background
The concept of a PNG National Qualifications Framework was first approved by the National Executive Council (NEC) together with other policies pertaining to the National Accreditation Policy of 1996. In the absence of a national coherent system of qualifications, formal articulation pathways, linkages to other education and training sectors, threats posed by unregulated cross-border education and private providers, it became necessary for the Government to establish a PNGNQF. The first PNG National Qualifications Framework (PNGNQF) was developed in 2009 by the Commission for Higher Education (CHE). It drew on the Australian Qualifications Framework (AQF), which was extensively revised in 2010 for implementation from 2013. The PNGNQF retained the structure of the former AQF.

The PNGNQF was approved by NEC in 2012 for implementation in educational institutions in PNG. Prior to that, it had been in use by the National Training Council (NTC) for TVET qualifications offered by private training providers. In 2013, the NTC approved a revised version of the TVET descriptors to apply to private training organisations. 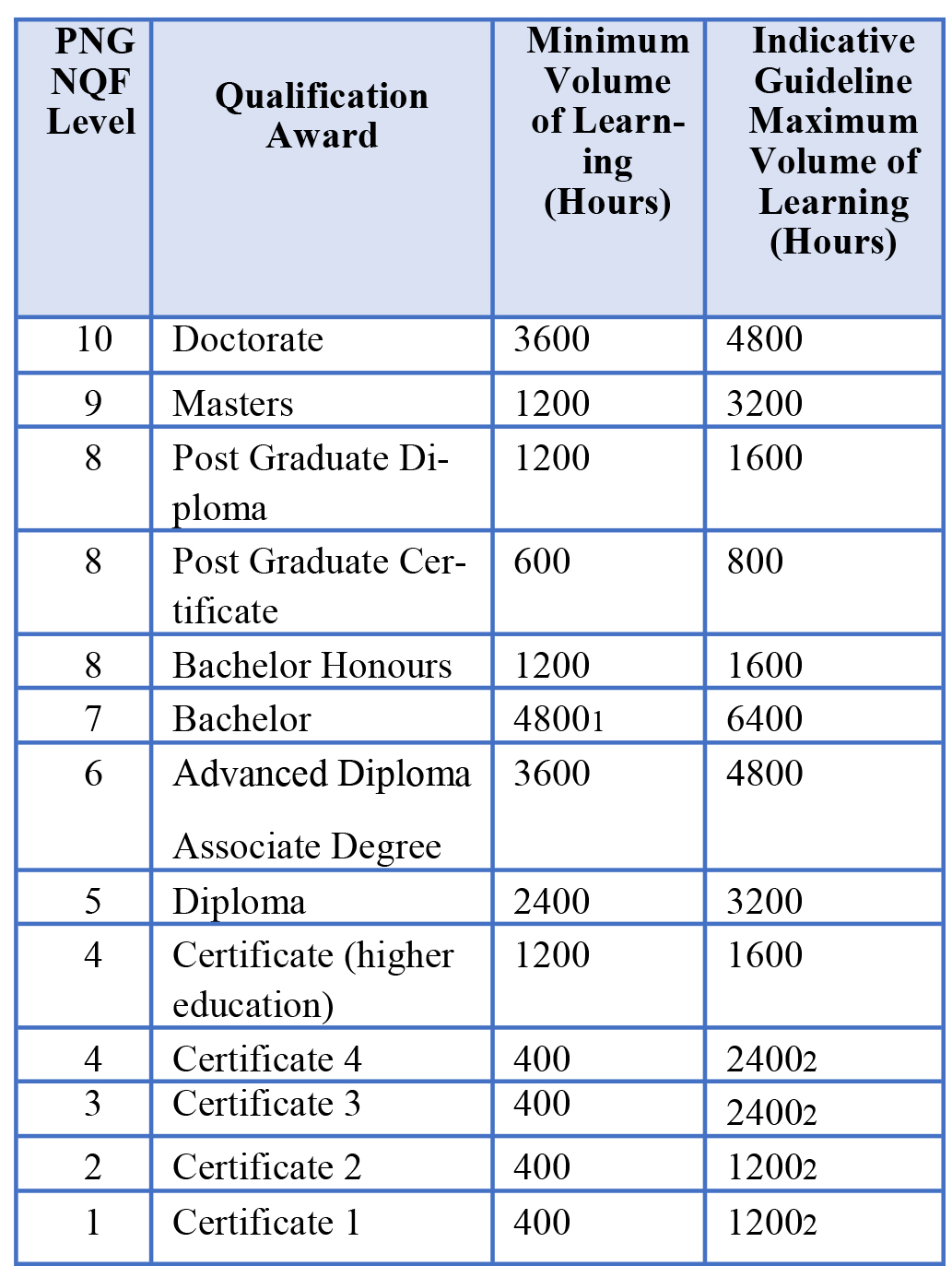 Level and Qualification Descriptors
A level descriptor is a statement that describes the characteristics expected of graduates of the level and indicates the learning demand that a student will encounter at each level. Descriptors exemplify the outcomes of the main qualification at each level, and demonstrate the nature of change between levels. They provide clear points of reference at each level, and describe features that cover the great majority of existing qualifications. However, the Framework has the flexibility to accommodate diversity and innovation, and to accommodate new qualifications as the need for them arises.